After we came back from Bangkok, we shop around the duty free shops before collecting our luggage. When we reached the luggage collection area, there were a lot of luggage placed nicely on the floor. Those are the remaining unclaimed luggage as all the bags were out from the flight. We immediately found one of our luggage as it has a bright colorful luggage cover. However, we could not find our 2nd luggage. After searching high and low for the luggage, we decided to make a report.

There was an officer nearby so we asked him where should we report about the lost luggage. He asked us which airline did we use and we told him it was Thai Smile by Thai Airways. He thought it was handled by Malaysia Airlines so we followed his instruction and walked to pillar K as below. 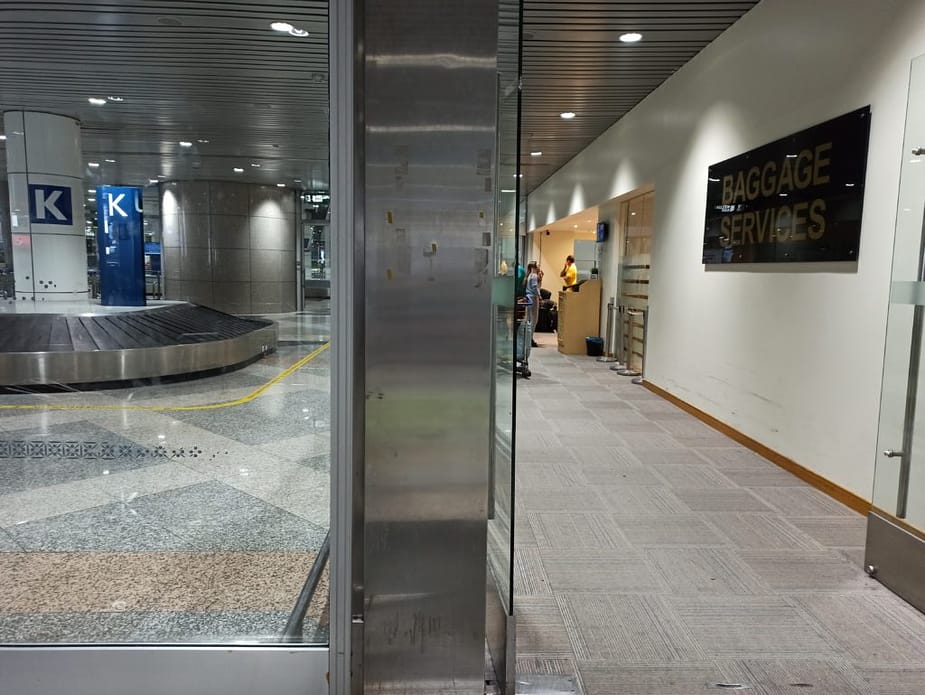 Outside the door there is a signage as below which we could not find Thai Airways but proceeded inside anyways. We took a number and waited for our turn. When it was our turn, the staff told us that Thai Smile is not handled by them but is by Pos Aviation so off we go to the other end which is near pillar B. 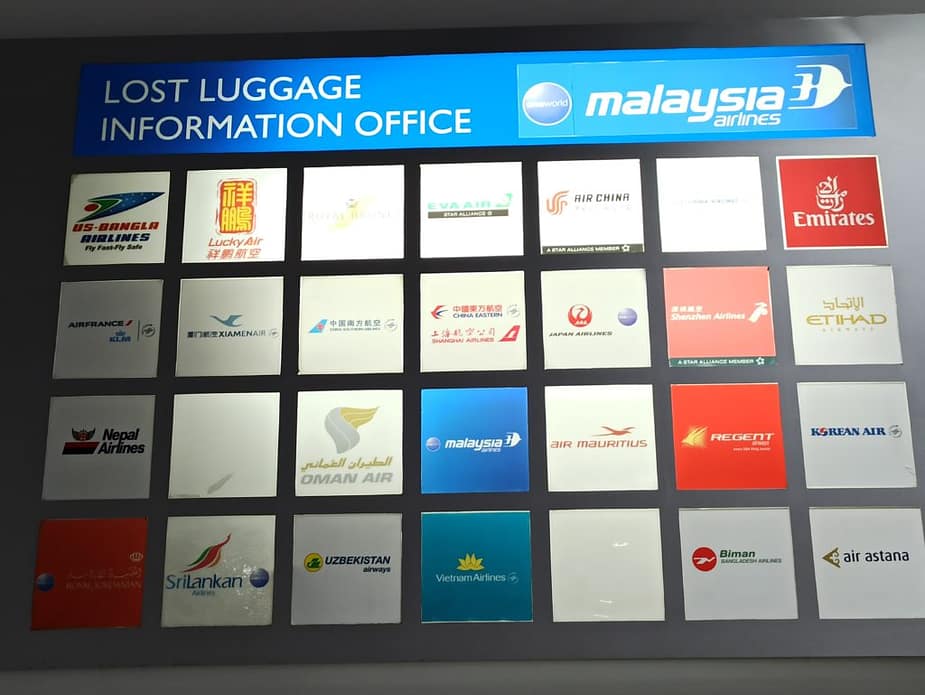 Halfway between our journey, there is a sign as below stating the airlines that are handled by either Malaysia Airlines or Pos Aviation. And on the 4th row under Pos Aviation you can see there are Thai Smile and Thai Airways. Below are the airlines handled by Pos Aviation placed outside the office.

The entrance of Pos Aviation is full of luggage. We checked around the luggage but none of it is ours so we proceeded inside.

We waited for a while as there were 2 people before us. When it is our turn, the staff asked some basic questions ie how the lost luggage looked like etc. After that, the staff sent a crew to double check at the location where our luggage is supposed to be at. However, when the crew came back, he confirmed it is no where to be found. Therefore, we proceeded to lodge the lost luggage report. If you have any inquiries, you may find the details below:

With the report given by Pos Aviation, we proceeded to claim from AXA where we have bought our travel insurance. After submitting the claim, it states that they will come back within 14 working days which they did on the 10th working days. However, the person in charge asked me to claim from the airline first and they will pay the balance, if any.

After getting the compensation from Thai Smile, I sent an email to the person in charge (PIC) to notify her. However, after many calls and emails, I did not receive any response besides auto-generated emails and generic replies from the gatekeeper.

Feeling frustrated and disappointed, I searched around on Google and found PIAM (Persatuan Insurans Am Malaysia) and AXA is one of its members. I wrote an email to PIAM on 4 June and on 9 June, I received a reply from the AVP of Service Recovery of AXA. Before I was able to provide more information to the AVP, I received an email in the afternoon on the same day from the PIC that my claim has been processed. 2 days later, I received the compensation in my bank account.

Below is the chronology of the events:

25/2 – Emailed AXA on the compensation from Thai Smile

9/6 – Claim is being processed

The whole process took about 6 months which is disappointing. If you face the same trouble, you may contact PIAM which might help expedite the process.

I sent an email to Thai Smile on 13 Jan. After that, I sent a follow-up email on 21 Jan as there was no response. Finally on the 27 Jan I received a response that they will be paying 600 Baht per kg (around RM80) for our lost luggage. After filling up the form that they shared and replied them, I received another response on 3 Feb that they will need a copy of our passport. I received a reply on 5 Feb that they will proceed with the payment. However, after not receiving any payment I sent a follow-up email on 21 Feb. Finally on the 25 Feb, I received the payment from Thai Smile. However, instead of a bank transfer or TT (telegraphic transfer), it was cash deposit via ATM machine instead which seems a bit odd. But I have nothing to complain since I received the compensation.

Below is the chronology of the events:

5/2 – Claim is being processed

The whole process took around 1 month plus which is acceptable.

Certain credit cards provide travel insurance coverage when you use the cards to pay for your travel tickets. In my case, I used the Maybank 2 Platinum Cards and one of the benefits is we get up to RM700k for travel insurance coverage. However, in the certificate of insurance, it states that lost luggage is not covered if it happens in the country of residence as per the screenshot below.

Therefore, I am not eligible for a claim in this case as our luggage is lost in Malaysia. You may read about the full Certificate of Insurance here.

Which airline or travel insurance company that you have filed for a claim before? How fast did you get the claim? Please feel free to share your experiences in the comments section below.